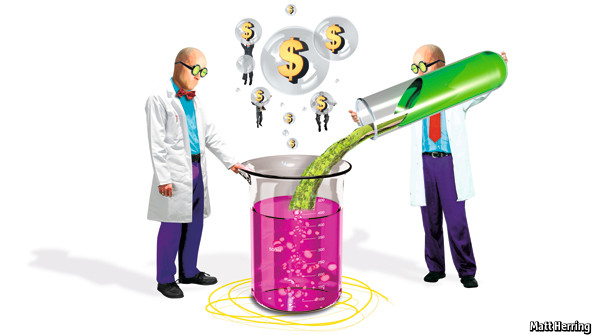 APPLE is generally regarded as an embodiment of everything that is best about innovative businesses. It was started in a garage. For years it played a cool David to Microsoft’s lumbering Goliath. Then it disrupted itself, and the entire entertainment industry, by shifting its focus from computers to mobile devices. But there is something missing from this story, argues Mariana Mazzucato of Sussex University in England, in her book, “The Entrepreneurial State”. Steve Jobs was undoubtedly a genius who understood both engineering and design. Apple was undoubtedly a nimble innovator. But Apple’s success would have been impossible without the active role of the state, the unacknowledged enabler of today’s consumer-electronics revolution.

Consider the technologies that put the smart into Apple’s smartphones. The armed forces pioneered the internet, GPS positioning and voice-activated “virtual assistants”. They also provided much of the early funding for Silicon Valley. Academic scientists in publicly funded universities and labs developed the touchscreen and the HTML language. An obscure government body even lent Apple $500,000 before it went public. Ms Mazzucato considers it a travesty of justice that a company that owes so much to public investment devotes so much energy to reducing its tax burden by shifting its money offshore and assigning its intellectual property to low-tax jurisdictions such as Ireland.

Likewise, the research that produced Google’s search algorithm, the fount of its wealth, was financed by a grant from the National Science Foundation. As for pharmaceutical companies, they are even bigger beneficiaries of state research than internet and electronics firms. America’s National Institutes of Health, with an annual budget of more than $30 billion, finances studies that lead to many of the most revolutionary new drugs.

Economists have long recognised that the state has a role in promoting innovation. It can correct market failures by investing directly in public goods such as research, or by using the tax system to nudge businesses towards doing so. But Ms Mazzucato argues that the entrepreneurial state does far more than just make up for the private sector’s shortcomings: through the big bets it makes on new technologies, such as aircraft or the internet, it creates and shapes the markets of the future. At its best the state is nothing less than the ultimate Schumpeterian innovator””generating the gales of creative destruction that provide strong tailwinds for private firms like Apple.

Ms Mazzucato says that the most successful entrepreneurial state can be found in the most unlikely place: the United States. Americans have traditionally been divided between Jeffersonians (who think that he governs best who governs least) and Hamiltonians (who favour active government). The secret of the country’s success lies, she thinks, in talking like Jeffersonians but acting like Hamiltonians. Whatever their rhetoric, governments have always invested heavily in promoting the spread of existing technologies such as the railways (by giving the rail barons free land) and in seeking potentially lucrative scientific breakthroughs (by financing almost 60% of basic research).

So far, so good. However, Ms Mazzucato omits to acknowledge how often would-be entrepreneurial states end up pouring money down ratholes. The world is littered with imitation Silicon Valleys that produce nothing but debt. Yes, private-sector ventures also frequently fail, but their investors know when to stop: their own money runs out. Governments can keep on throwing taxpayers’ money away. It was once fashionable to praise Japan as an entrepreneurial state being guided to world-domination by the enlightened thinkers in its mighty industry ministry. Nowadays it is clearer that the ministry has been a dead hand holding back innovation and entrepreneurship.

Ms Mazzucato laments that private businesses are too short-termist. But governments also routinely make investments on the basis of short-run political calculations rather than long-term pay-offs. She worries that anti-statist ideology is reducing the state’s ability to make important investments for the future. In fact, the explosion of entitlement spending, which is allocating ever more of the country’s income to the old, is doing more to undermine the entrepreneurial state than the tea party. She is also too hard on business: putting all those different state-funded technologies together into user-friendly iPads and iPhones required rare genius that deserves rare rewards.

The book offers only hints, rather than a complete answer, to the central practical question in all this: why are some states successful entrepreneurs while others are failures? Successful states are obsessed by competition; they make scientists compete for research grants, and businesses compete for start-up funds””and leave the decisions to experts, rather than politicians or bureaucrats. They also foster networks of innovation that stretch from universities to profit-maximising companies, keeping their own role to a minimum. The Jeffersonian-Hamiltonian paradox is important here: the more governments think in terms of mighty “entrepreneurial states” the less successful they are likely to be.

How not to spend it

Quibbles aside, Ms Mazzucato is right to argue that the state has played a central role in producing game-changing breakthroughs, and that its contribution to the success of technology-based businesses should not be underestimated. She is also right to point out that the “profligate” countries that are suffering the most from the current crisis (such as Greece and Italy) are those that have spent the least on R&D and education. There are many reasons why policymakers must modernise the state and bring entitlements under control. But one of the most important is that a well-run state is a vital part of a successful innovation system.